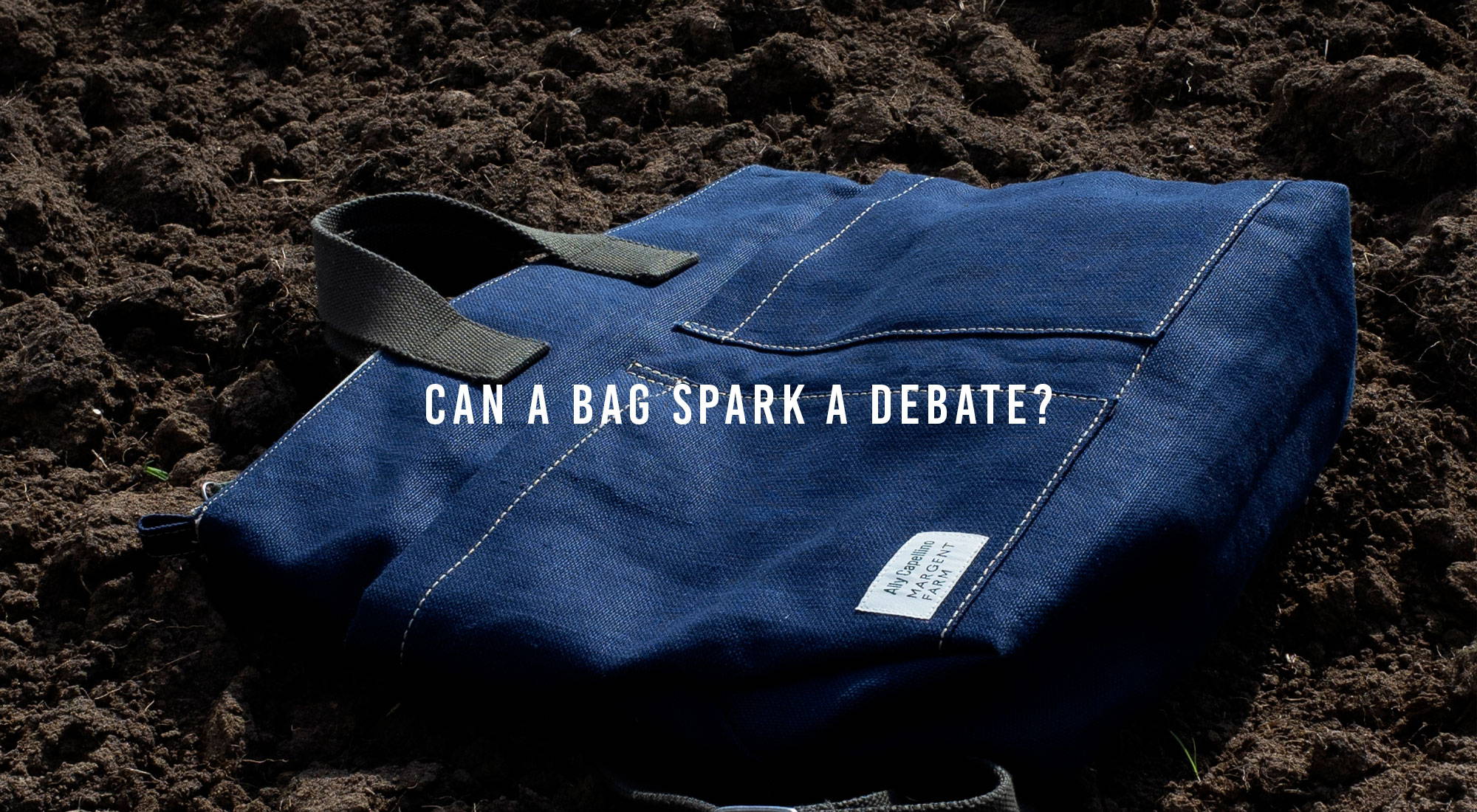 Impressed by the ambition and achievements already made with hemp products by Margent farm we are really proud to collaborate on a limited-edition organic hemp backpack. Launching during World Wellbeing Week (June 21 - June 30) it is intentionally symbolic. Demonstrating the virtues of hemp in fighting climate change, the war on plastic, boosting biodiversity and improving our health, the intention of the partnership is to spotlight the challenges around producing hemp in the UK. 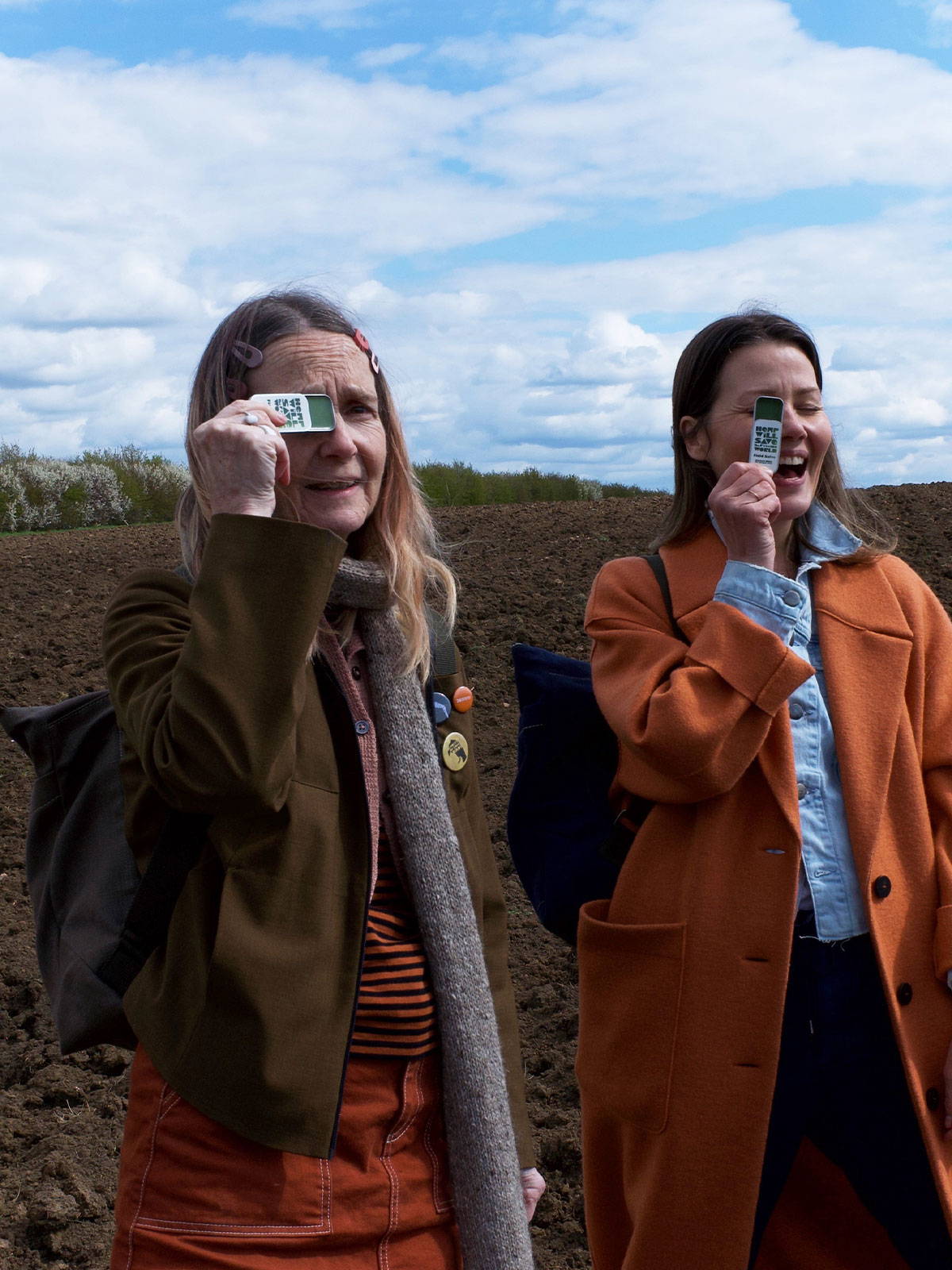 A mutual admiration on Instagram brought about the first meeting between Ally and Margent co-founder Fawnda Denham, opening Ally’s eyes to the possibilities of hemp. Her initial interest was sparked by the discovery of a bio-resin camera case, created collaboratively by Margent Farm and the University of Cambridge.

The friendship developed through a shared affinity for great design, a fascination with the natural world, and where the two intersect. The duo began to experiment with the fibre and soon after the idea for the bag was born. However, as the pair quickly discovered, producing hemp textiles in the UK is hugely challenging.

In fact, the woven material used for the bag had to be sourced outside the UK. Prohibitive licence fees, considerable red tape and cultural misunderstanding have, so far, thwarted the industry’s re-establishment and scaling. At a time when the nation is making plans to ‘build back better’, and with increasing calls to invest in nature-based solutions, hemp is just too versatile to overlook. From bioplastics, low carbon textiles, and green building material to abounding health and wellbeing applications, this plant could quickly become a Goliath of the green economy. The concept behind this bag is an urgent reminder of what’s needed to unlock the potential of this native crop. 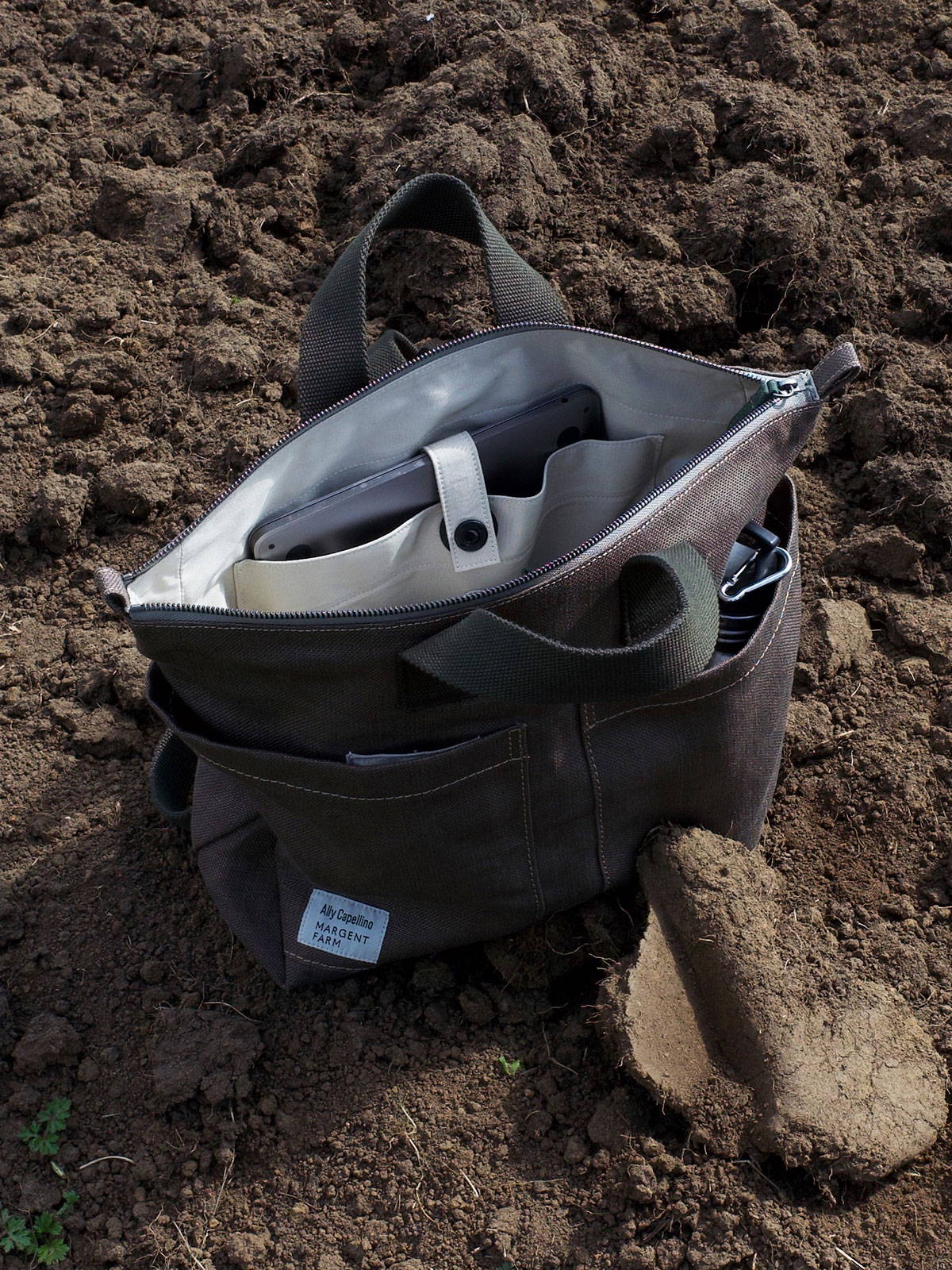 Dense and tall, hemp purifies our air and its omega and protein value can bring enormous benefits to our health. Comparable to bamboo, hemp is one of the fastest growing crops on the planet. Its long tap roots work deep in the soil to decompact the ground and it sequesters carbon from the atmosphere at a far higher rate than any other crop grown in the UK. The bag itself; a softly constructed zip top backpack, is made in a strong plain weave hemp fabric with a cotton twill lining. Classic AC functionality; multiple pockets including internal padded laptop sleeve pocket. Each leather-free, vegan-friendly bag comes with a small tin of field salve from Margent Farm( upon email request, due to red-tape) that you can keep safe in a specially designed pocket. 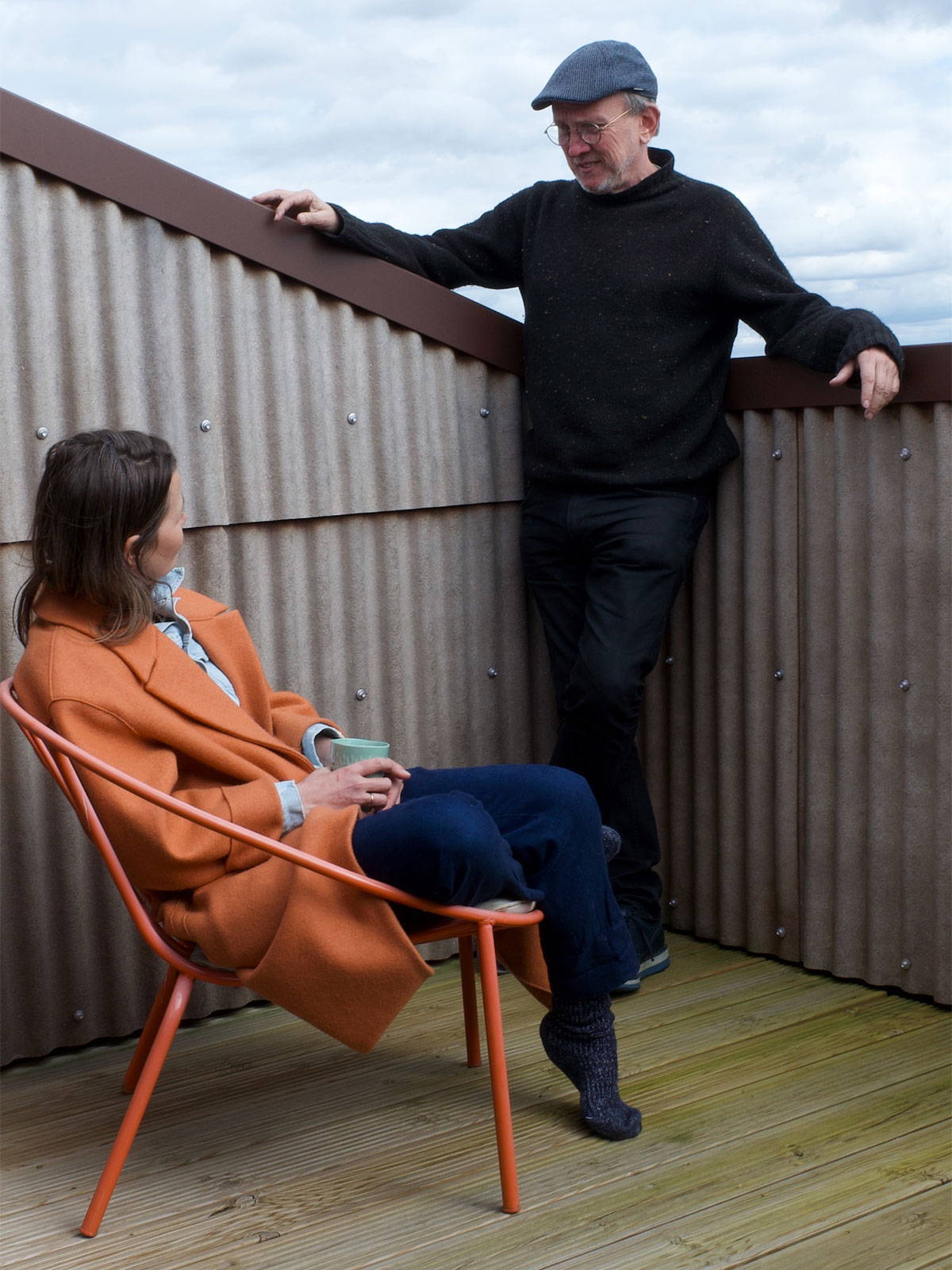 Margent Farm co-founder Fawnda Denham first encountered hemp through her own interest in CBD and introduced good friend, renowned film-maker and now business partner Steve Barron, to the idea of the farm. “The more we unravelled the plant it was just so giving in so many areas and in so many ways. First of all, it’s been around for hundreds and hundreds of years. It’s incredibly durable, low maintenance and beneficial as a rotation crop. You don’t need a lot of water and in conventional farming there would be no need for pesticides. I have pictures of when we took over Margent and the soil was dry like a parking lot in LA. A couple of years later after growing our hemp crops, it’s completely transformed.”

Since setting up their certified organic farm in 2016, Fawnda and Steve have demonstrated hemp’s sheer versatility and potential. They’ve made trays and coasters for hotels like The Standard in Kings Cross, and balms and oils for the Laslett in Notting Hill and Goodhood in Shoreditch. They’ve even built their own farm-house from it. 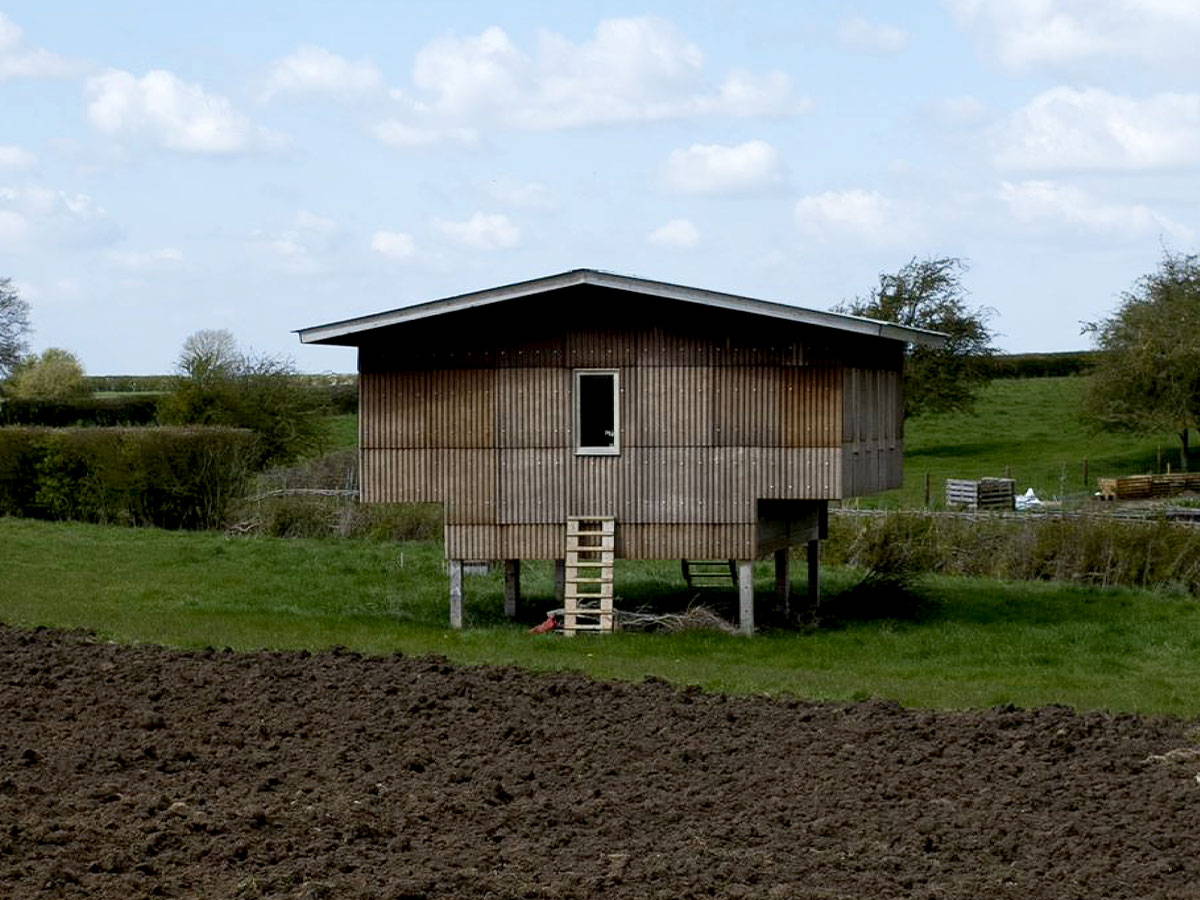 We rarely, if ever, see hemp growing in farmers’ fields in the British countryside (there are only around 3,000 acres of this wonder-crop across the UK). This is because since cannabis was made illegal in the 1920s, hemp has experienced a huge decline. While hemp may look like cannabis it crucially contains safe, low levels of the intoxicating compound THC. Despite this, it has been ‘tarred with the same brush’ and is subject to cripplingly tight legislation. Commercial farmers face a £500 licence fee, strict guidelines and government spot checks. Worst of all a large chunk of the potential value for farmers to grow the crop is removed by further legislation that demands the farmers destroy their crops hemp leaves and flowers, because they contain CBD. A cannabinoid that is fast being recognised for its ingestible and topical benefits.

The few farms that successfully grow hemp are served only by a handful of mills and fabric spinners operating in the UK, where investment in infrastructure has been lacking. Margent Farm could not use their own hemp in the making of the bag because they could not find domestic partners for processing so had to find solutions abroad, which presented challenges. As Fawnda explains: “When I was trying to order hemp fabric for the farm, everything was coming from China or Eastern Europe and it wasn’t traceable. We were really keen to keep the carbon emissions low in our supply chain yet had no choice but to source from abroad. Fortunately, Ally found a producer growing organic hemp, and as we know the crop doesn’t need chemical intervention, we had relative confidence in this. But the processing is a different story, it’s so hard to judge the transparency of these systems.” 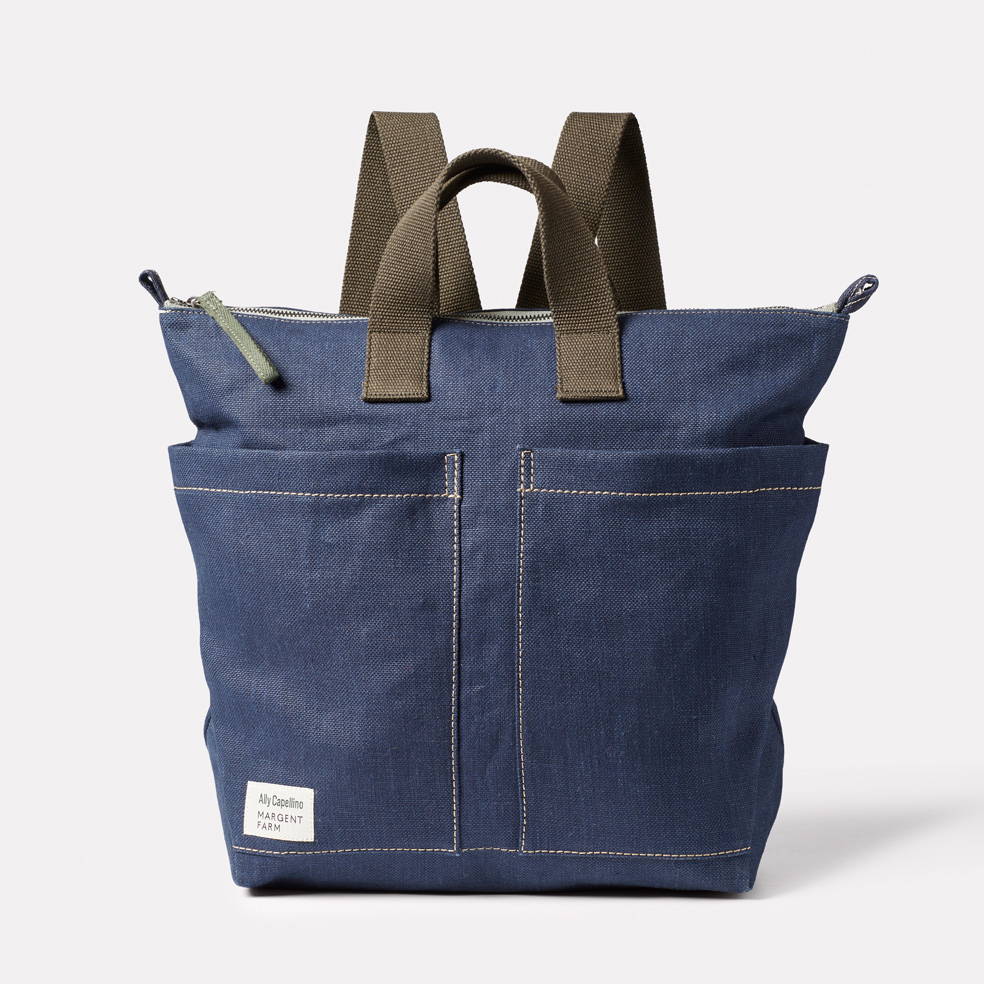 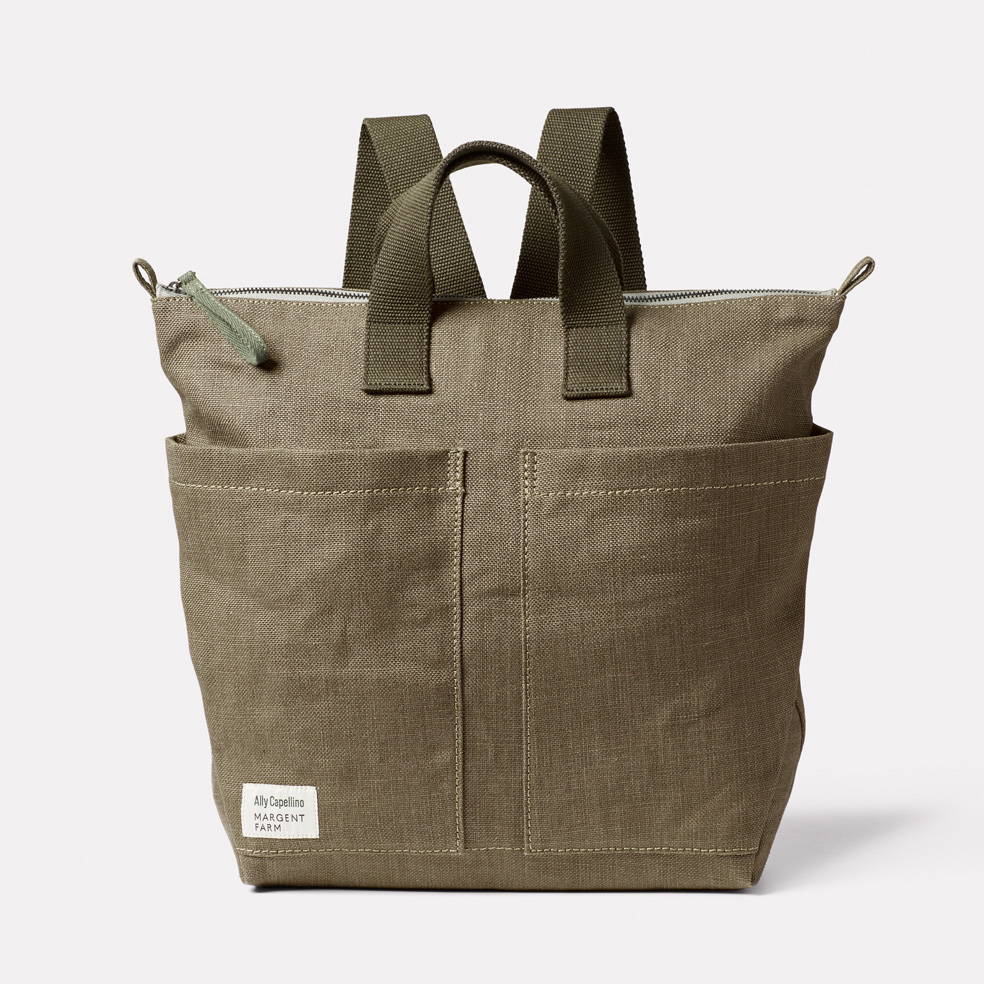 Their future aspiration is to create collections that are 100% British made, but in order to get to this point Fawnda highlights that the whole supply chain needs support, de-regulation and investment, and stresses the importance of developing the industry collaboratively, so the economic, societal and environmental benefits are far reaching.

Margent Farm and Ally Capellino hope to inspire a growing collective of designers, producers, politicians and engineers to drive the re-establishment of the British hemp industry and reversing the trend from importer to exporter. Alongside this, an urgent re-education about hemp and its benefits is needed. Fawnda continues: “I’ve been observing campaigns that teach school children where their food comes from. I think almost the same approach needs to happen with hemp, distinguishing that one is a drug in some countries, and that the other is a useful cousin of the cannabis plant that will enable us to do many things for the environment and for our health.”