Saving the Soundtrack of the British countryside

Located in the Sussex Weald, Knepp is a 3,500 acre estate which has committed itself to a pioneering rewilding project that has been heralded as the future for nature conservation in the UK, and is an internationally recognised success story. Over the last twenty years, Knepp has experienced an extraordinary increase in wildlife and has generated habitat for a multitude of rare and dwindling species of bird, no mean feat when according to the RSPB, we have lost 44 million birds from the skies since the 60s. 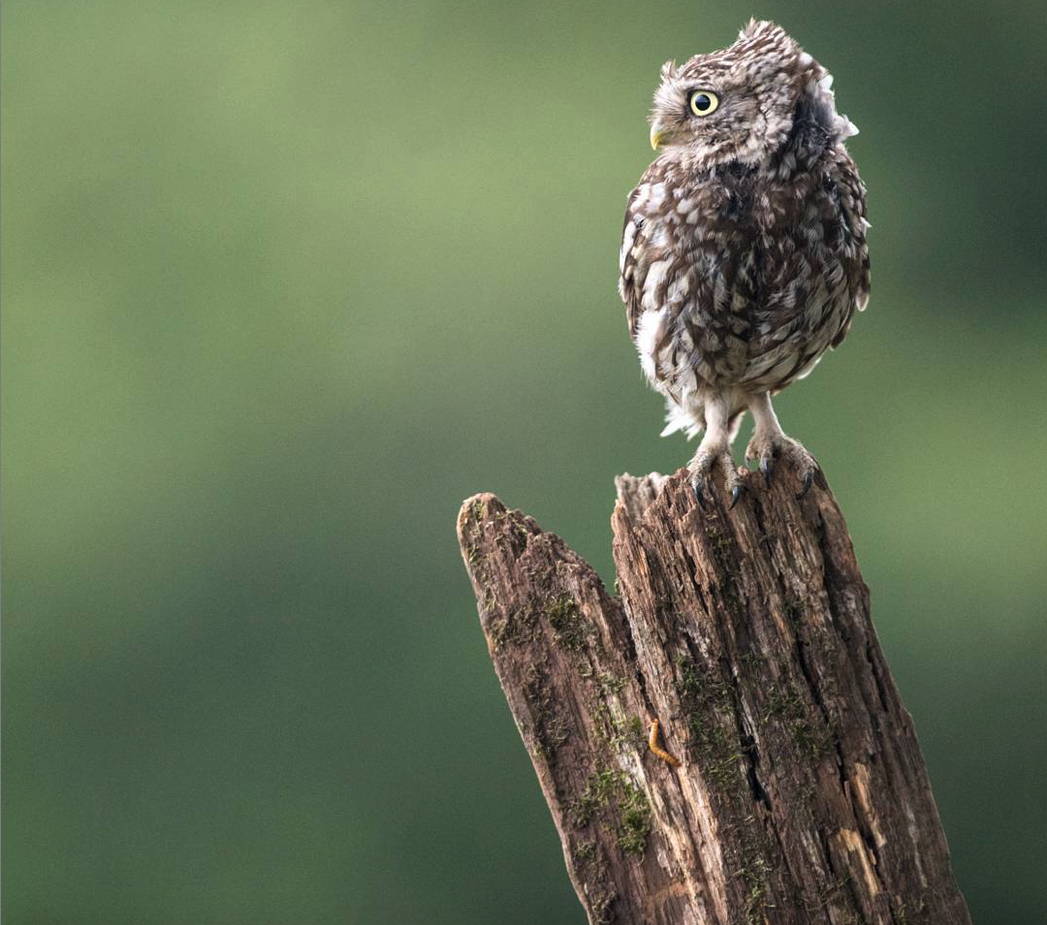 Now rich in biodiversity and leading the way for a nature-first approach, it is a far cry from the struggling arable and dairy farm that was inherited thirty five years ago. Charlie Burrell and his wife Isabella Tree, the owners of Knepp, defied convention and threw all caution to the wind and instead listened to a calling from nature. 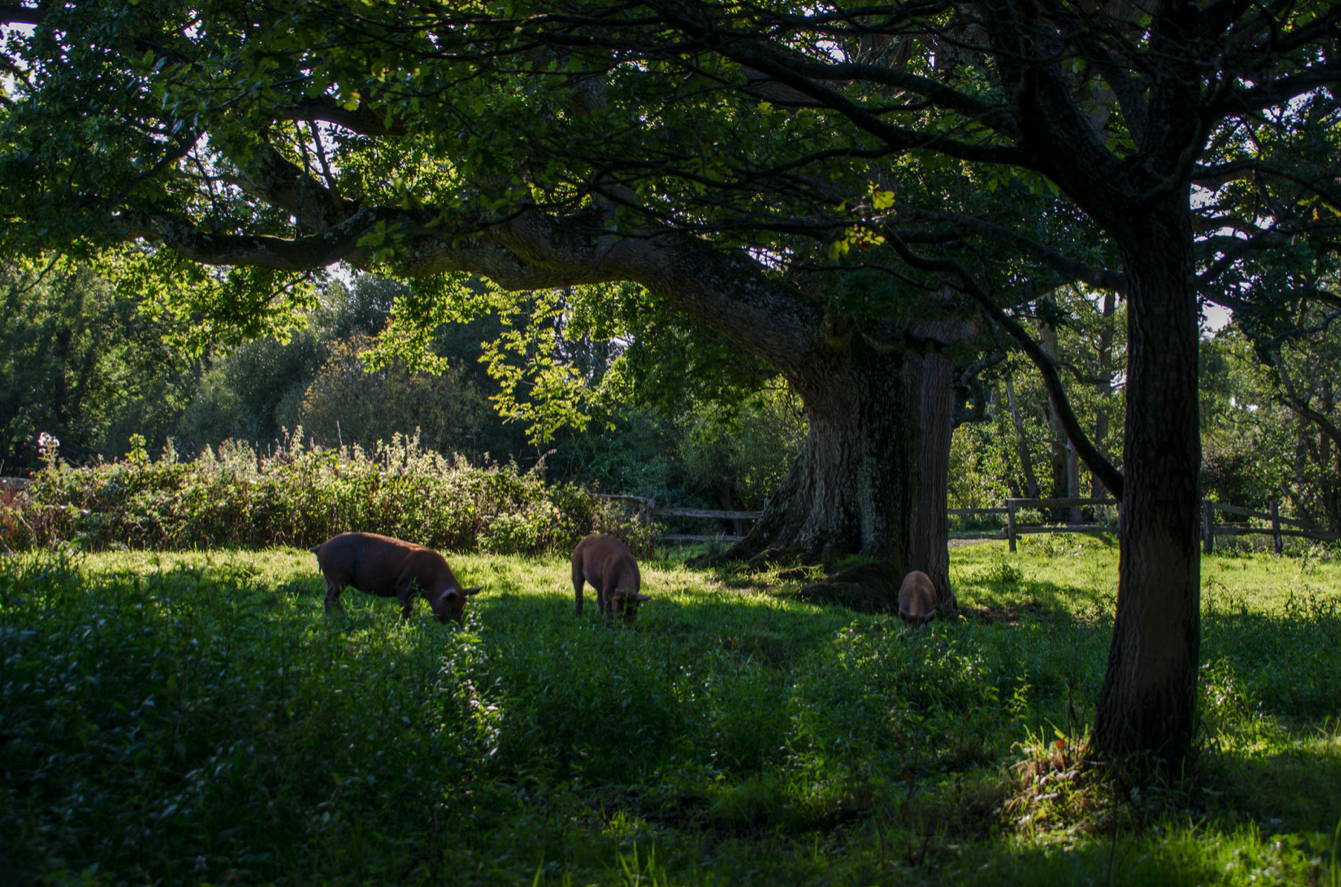 Tree recounts, ‘During avian rush hour at Knepp, the air is filled with intense birdsong, a thrumming which reverberates through the body. From jackdaws, rook, carrion crows, jays, magpies, buzzards, ravens, collared doves, wood pigeons, feral magpies, buzzards, stock doves, pheasants.’ You might think that you were in Africa rather than 45 minutes south of London and in the main flight paths of Gatwick. 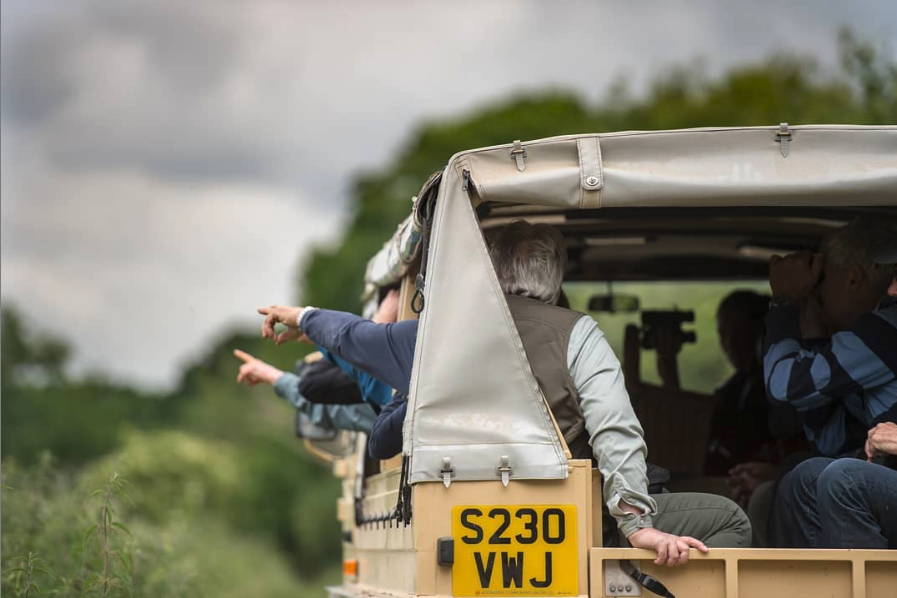 The estate’s Wildland, with free-roaming animals around which its business now operates (and the conversion of former farm buildings for rent as office space and light industrial use) offers safaris, camping and glamping (tree houses and yurts), and the sale of ethical pasture-fed meat. To see for yourself how they are driving habitat regeneration, safari options include, a dawn chorus two-hour walk to hear ‘liquid song of male nightingales and the purring of turtle doves’ with frequent stops for bird-watching; or, at more sociable time of day, after cup of tea and brownie, a tour of kingfishers’ habitats and territories; to an expert talk and dinner in the Cow Barn. 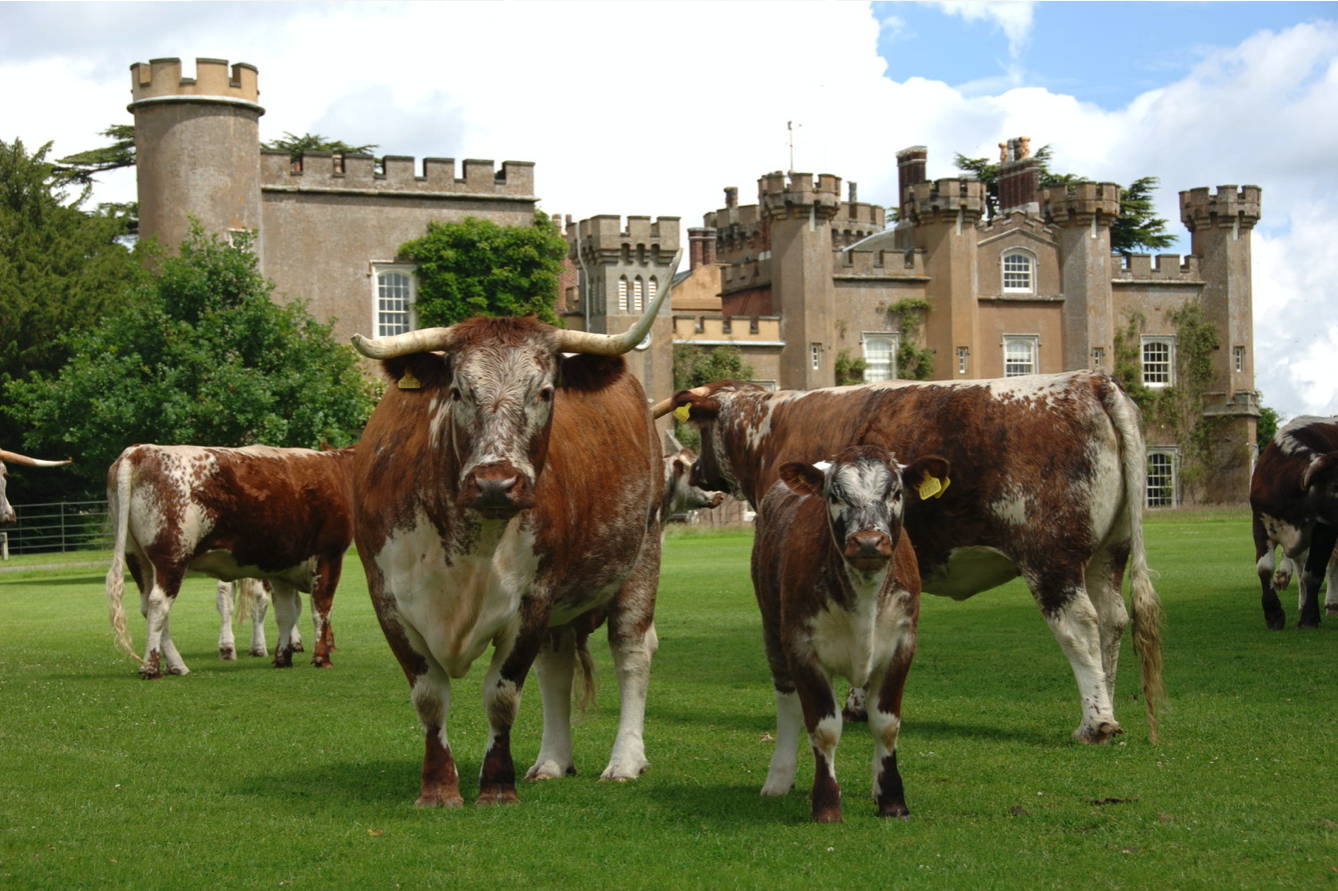 Knepp’s approach is to let large, free-roaming herbivores be the drivers of nature, encouraging a wild and dynamic landscape to flourish, and within it the interconnecting ecosystems and biodiversity. Knepp Wildland is now one of the most important breeding hotspots for nightingales in the country. 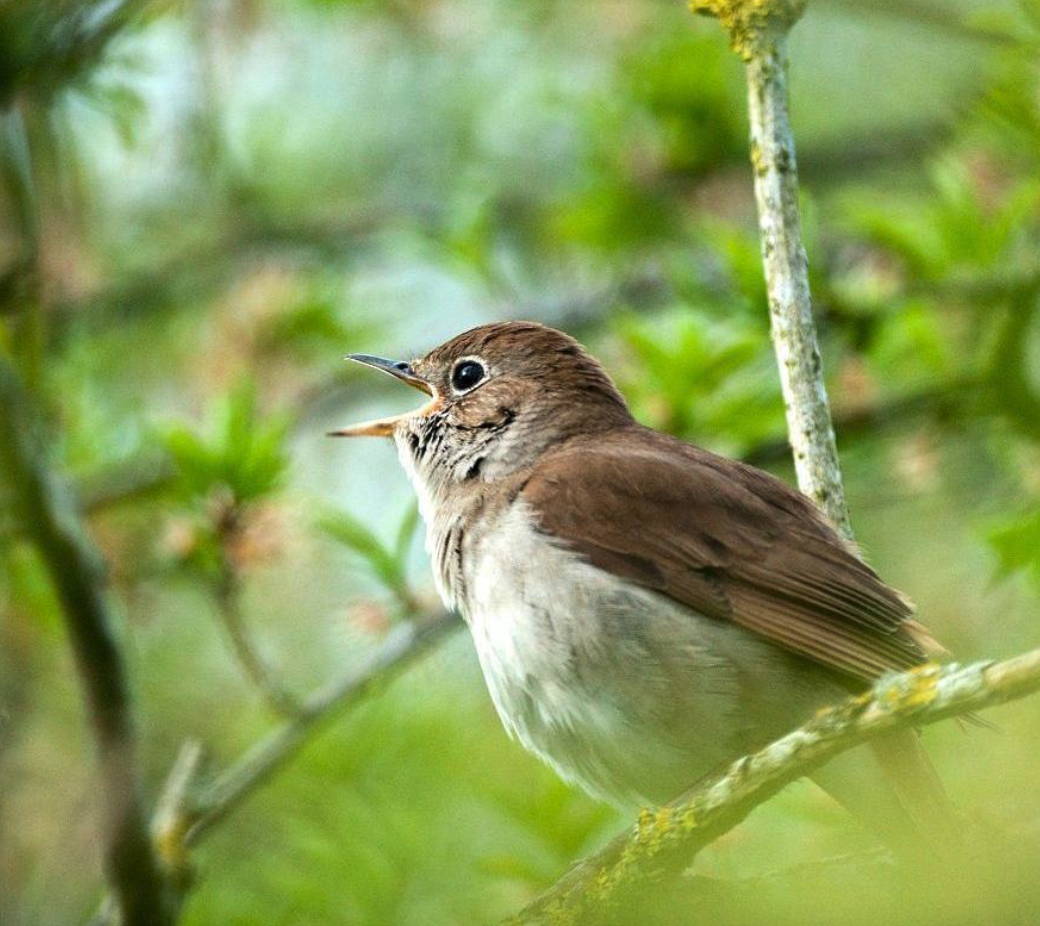 ‘The song of nightingale is not an easy ride. It throws the ear with unexpectedness – phrases fire off, one after another: florid trills, first rich and liquid, then mockingly guttural and discordant; now a sweet insistence of long, lugubrious piping; then bubbling chuckles and in drawn whistles; and then suddenly nothing – a suspended, testing hiatus before the cascades and crescendos break forth again.

A single nightingale has around 180 ‘riffs’ or song phrases in its repertoire, from a total of 250 riffs for the species, which it sequences differently every single time it sings. Its vocal chords belt out like organ pipes, and the performances can be marathon. A typical aria lasts thirty minutes, one nightingale has been recorded singing non-stop for twenty-three and a half hours.’ Isabella Tree 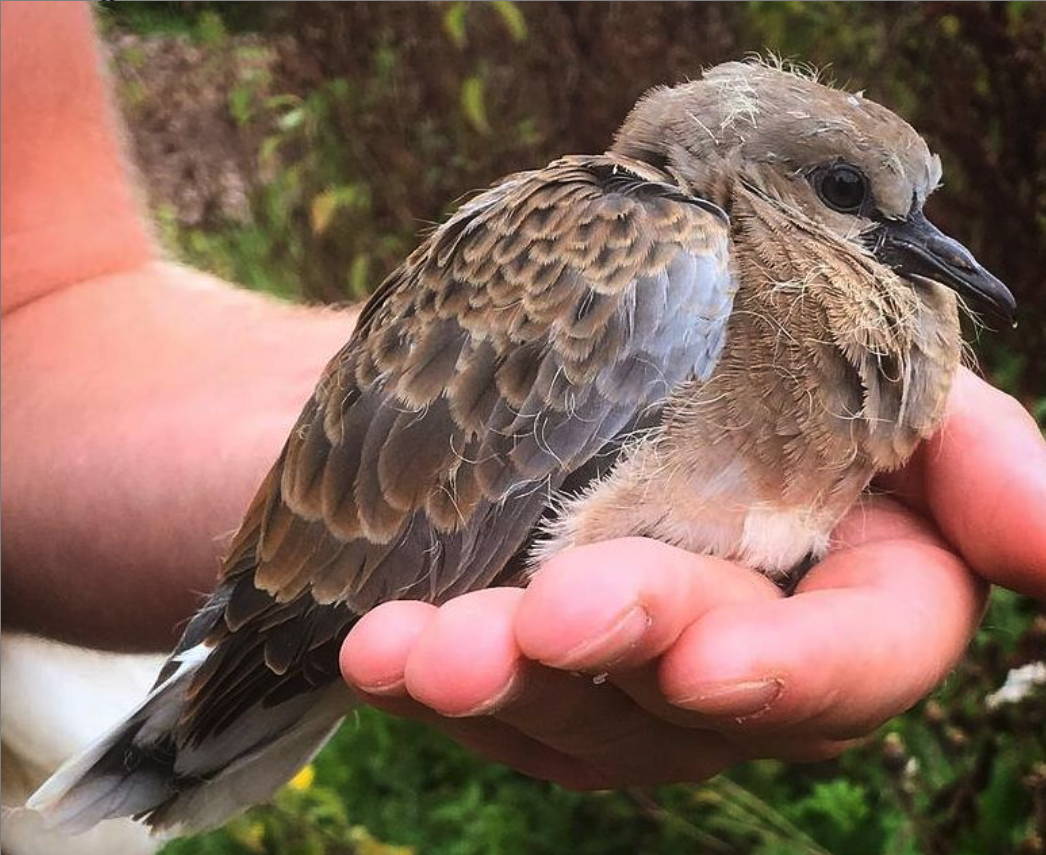 Over the last fifty years, the British countryside had been transformed and has seen the destruction of much avian habitat. Sussex is one of the last redoubts for turtledoves, their numbers reduced by 93% since 1994. Tree notes ‘Their gentle turr-turr-ing often falls beneath the register of the older human ear so it’s harder for your typical birder to track them.’ 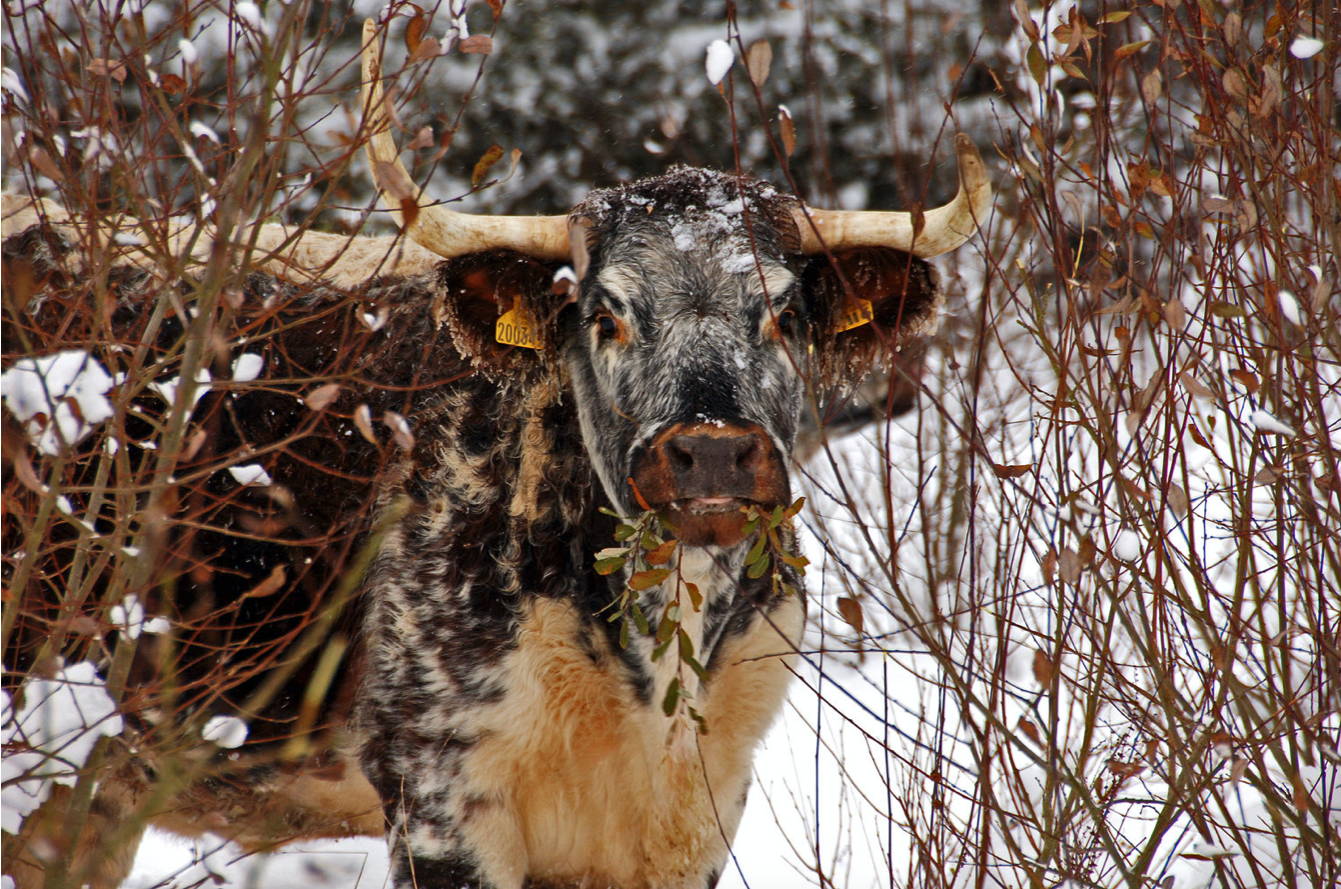 For the owners of Knepp Estate, the turning point was in 2000 when the Dutch ecologist Frans Vera’s ground-breaking book ‘Grazing Ecology and Forest History’ was translated into English. It is Vera’s theories about the importance of large free-roaming herbivores as the creators of habitat that inspired them to rewild Knepp. The year before, a visit from Ted Green MBE, one of the country’s leading authorities on ancient trees, had inspected the 550 year old Knepp Oak, next to which Knepp Castle had been built. Ted identified ailing trees under which the ground had, for decades, been ploughed and treated with agri-chemicals, causing soil and root system damage. With a bank overdraft of £1.5million, they decided enough was enough, that conventional farming was just not working for their land. It took a love for nature and huge leap of faith to finally let go. 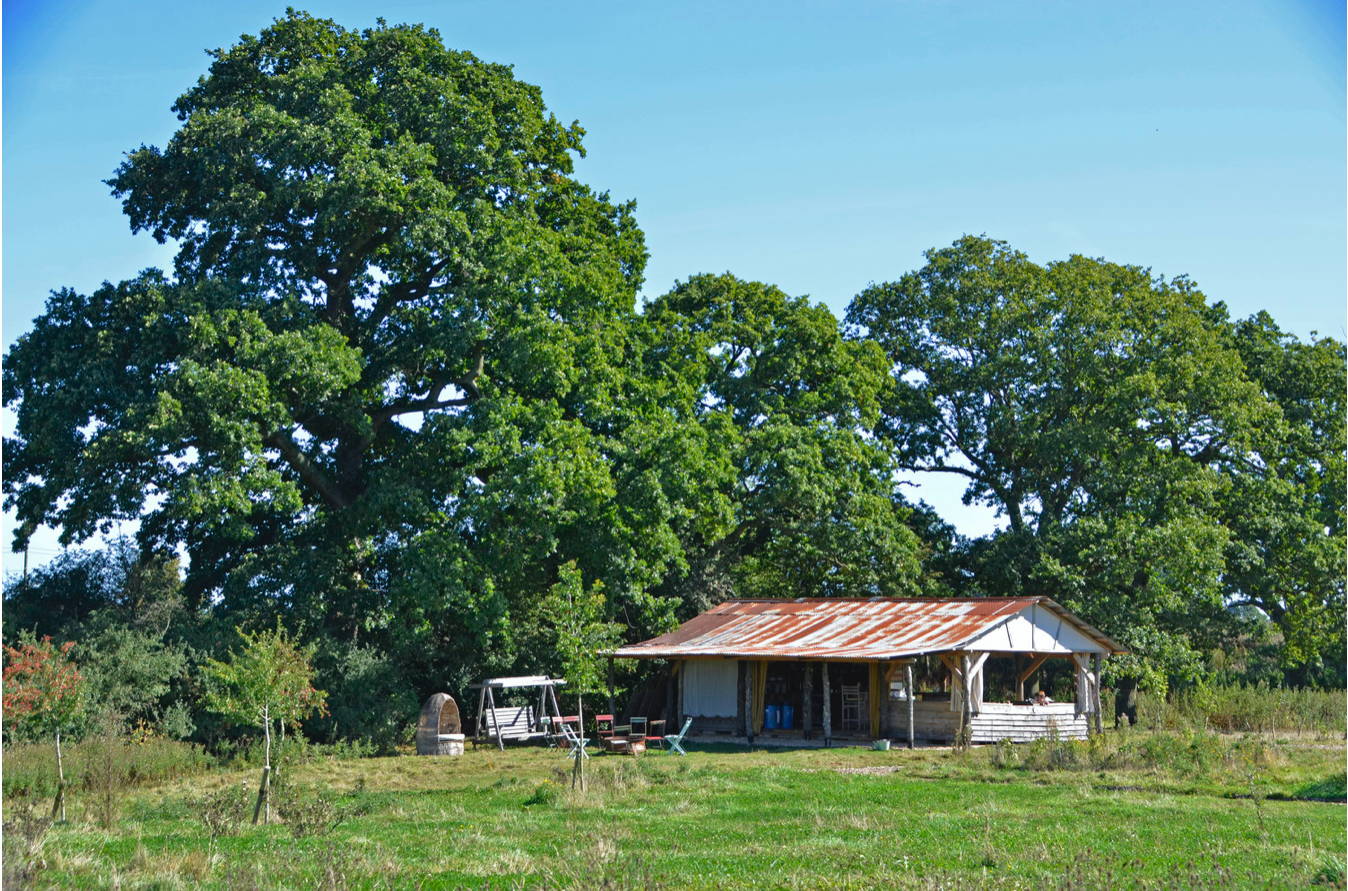 In old Sussex dialect there are over thirty words for mud. Knepp sits on 350 metres of heavy clay, which clags up between October to March, and then in the summer dries hard with deep surface cracks. The Burrells had inherited the arable and dairy farming business from Charlie’s grandparents and, as all good farmers then did, spent years investing in large-scale machinery, intensifying production and pumping in artificial fertiliser, herbicides, pesticides and fungicides in their efforts to increase their yields, and it just didn’t add up.

On selling all the farm equipment and their three dairy herds, they removed 70 miles of internal fencing and barbed wire, destroyed the Victorian drains and let the natural wetlands re-establish. After deer-fencing the perimeter of the estate, the Burrells then introduced hardy breeds of herbivores as proxies for the animals that would once have roamed our countryside. Old English longhorn cattle stand in for the aurochs, the original ox; Exmoor ponies recreate the actions of the tarpan, the original horse, Tamworth pigs mimic wild boar. Fallow and red deer were also added to the mix. Each species creates different disturbances through trampling, rootling, rubbing and snapping branches, and de-barking trees; and each has different food preferences, as well as carrying different seeds in their gut, hair and hooves – and transporting nutrients around the landscape in their dung and urine. 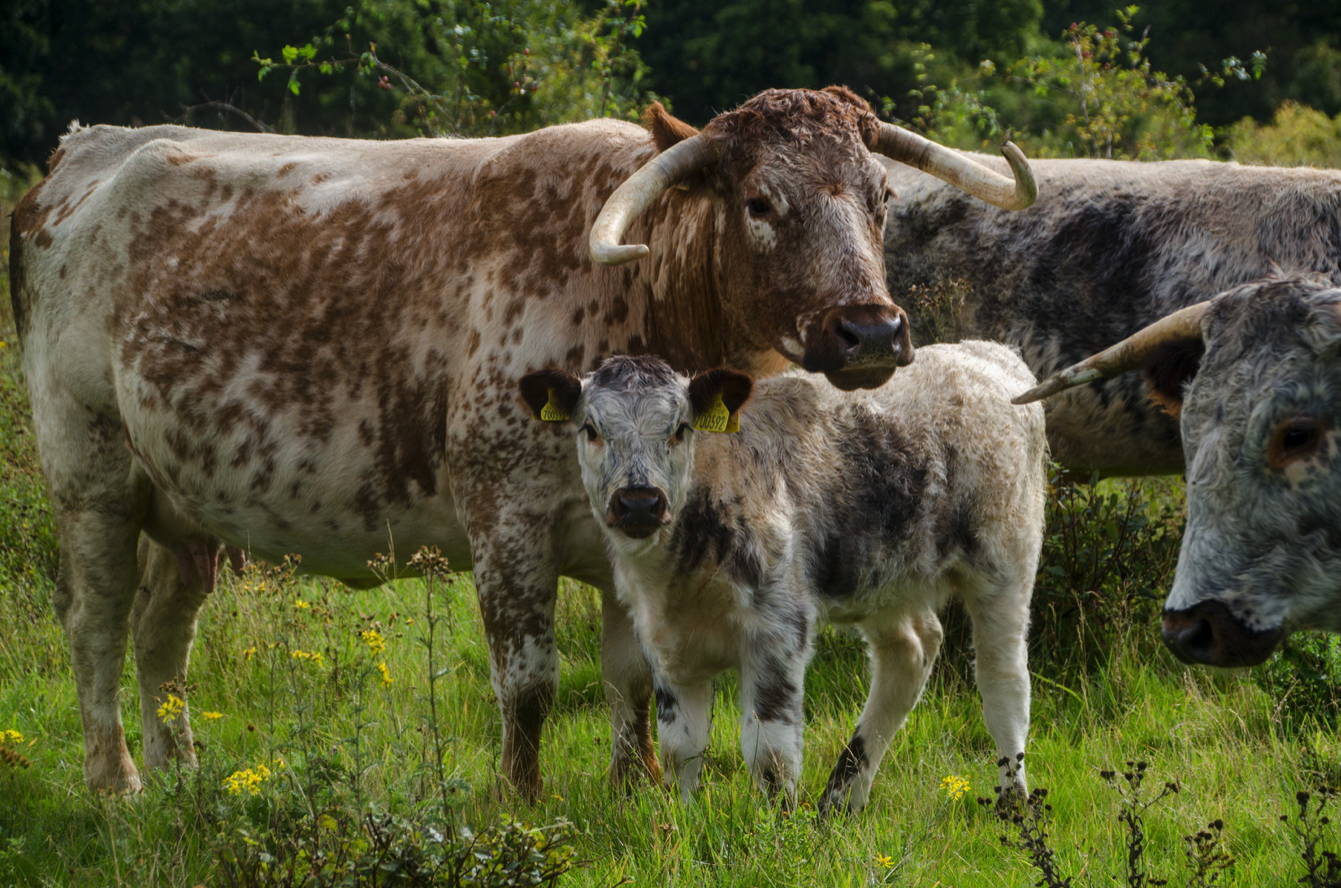 These disturbances create a mosaic of habitats (very different from the relatively undynamic and species-poor closed canopy woodland we often have in our heads as the conservation ideal), as well as encouraging the colonisation of native wildflowers, often disparagingly called ‘weeds’, such as scarlet pimpernel, red clover, black medick, fumitory, vetches, which have tiny, protein-rich seeds on which so many bird species – including the turtle dove - depend. Thorny scrub – also often maligned but, in fact, one of the most biodiverse habitats of all - grew up in former arable fields providing both protection and food for insects, birds and small mammals. Chemical free, the multitude of insects are an important, if uncelebrated, part of the food chain – including myriad species of dung beetle – a keystone species for soil restoration. In order to maintain the optimum conditions for biodiversity, the free-roaming animals are culled, keeping the stocking density very low. This ensures a constant battle between animal browsing/disturbance and vegetation succession (the rate of plant establishment). It is this battle which provides the dynamic, messy margins in which life thrives. 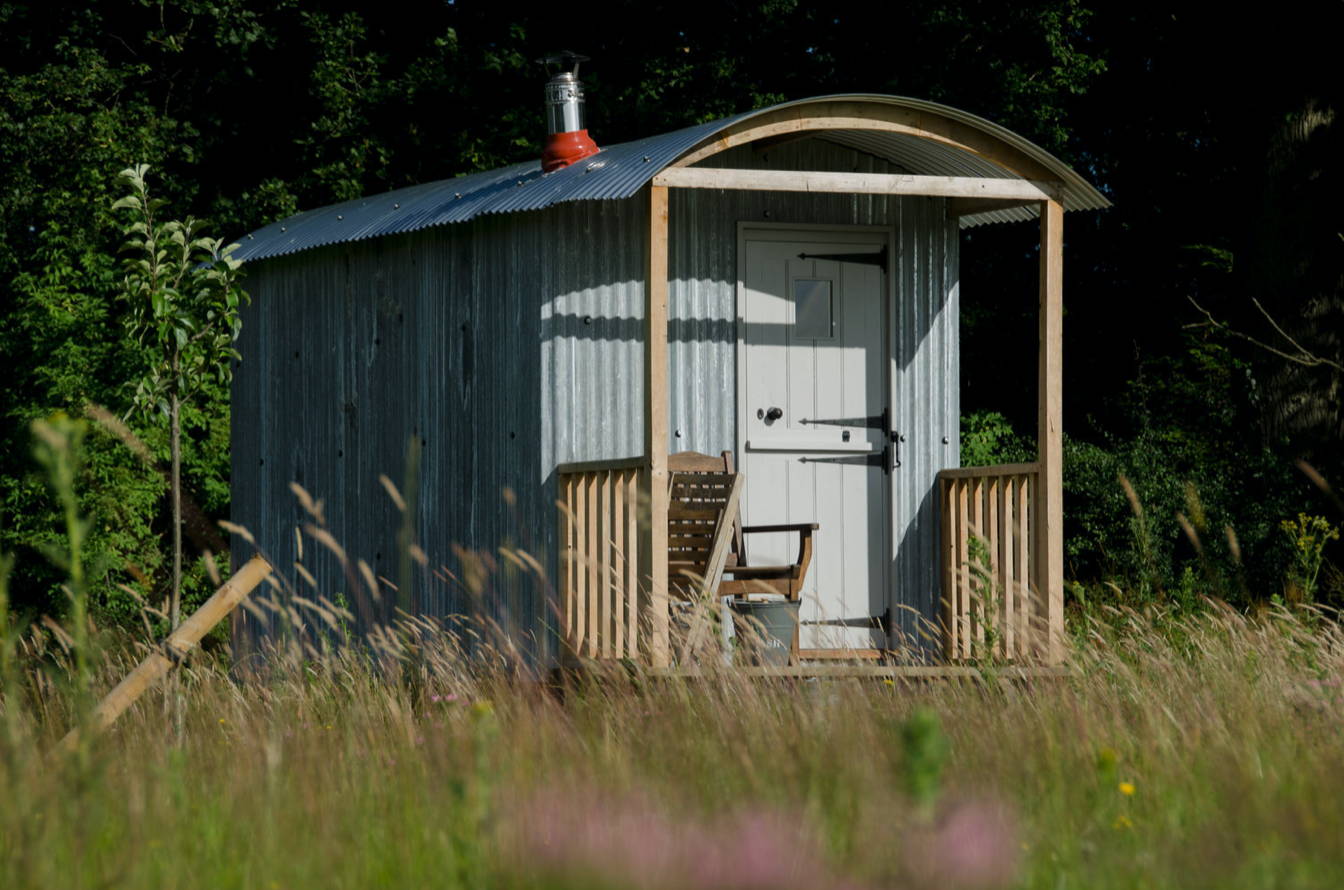 The National Farmers Union predicts that there are only 100 harvests left in the UK before there is no top soil left in which to sow anything. Whereas at Knepp, the soil had doubled in carbon, organic matter and quantity of microbes. Around the world, agricultural soil has become so degraded through ploughing and chemical inputs it simply blows or washes away. It all hails from the Dig For Victory campaign of WW2, since when we have lost 97% of wildflower meadow and 75,000 miles of hedges, ploughing everything in sight for over-production, and losing almost all lowland heathland and low land wetland.

‘The remarkable story of an astounding transformation’ - George Monbiot 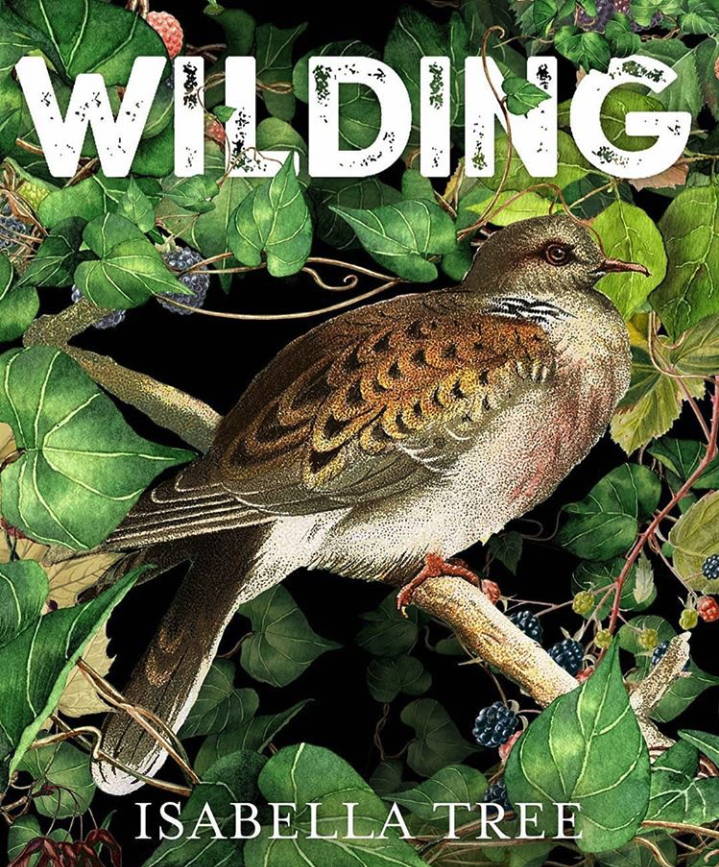 For Knepp, their approach has proved that the unpredictability of nature and all-encompassing benefits of biodiversity can work alongside a profitable business. Additionally, there are the invaluable benefits of sequestering carbon, cleaning water, purifying air and mitigating against floods. Peregrine falcons are now breeding in the tops of trees at Knepp and all five species of British owls can be found on the estate. Instead of focusing on maintaining habitat for one particular species or suite of species, Knepp are hands off the steering wheel, allowing nature to find its own balance. The teeming wildlife provides a soundtrack of insects, birds to rutting animals, happily self-conducting their own natural orchestra.

Wilding: The Return of Nature to a British Farm, Picador

‘A poignant, practical and moving story of how to fix our land, this should be conservation’s salvation; this should be its future; this is a new hope’ - Chris Packham